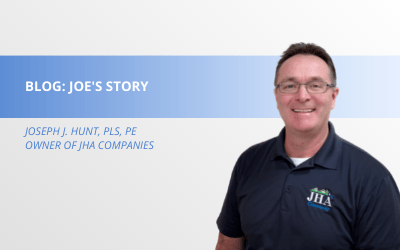 March 15, 2022 | Joe Hunt is the owner, founder, and fearless leader at the helm of JHA Companies. He grew up on a dairy farm in northeastern Pennsylvania and worked in construction before attending Penn State Wilkes-Barre for Land Surveying. He joined the Army National Guard after college, where he served for 11 years, retiring as an E6 Staff Sergeant. After basic training, Joe continued his education at Penn State Harrisburg, where he earned his bachelor’s degree in environmental engineering. Upon graduating, he started his career at a firm in Reading, PA, working as an Engineering Technician. In 1999, he went to work at Yerkes Associates in West Chester, PA, starting in wastewater and moving into land development after returning from a 1-year deployment. In this role, Joe served as Vice President of Land Development and was most proud of being selected and leading the team as site civil engineer for the new Villanova University Charles Widger School of Law and parking structure project. Deep down though, Joe always had a desire to get back to his roots in northeastern Pennsylvania and to become involved in mission trips with Engineering Ministries International. The emerging natural gas industry was just the opportunity he was seeking. On November 1st, 2008, Joe started JHA Companies. After just eight months in business, he moved his family and the company to northeast Pennsylvania. In the early days, the JHA team was 100 percent remote (working from home offices), but as the company grew, the need to integrate and be together was necessary. Over a period of several years, eight office locations have been formed, all while maintaining a distributed hybrid virtual workforce in home offices. As JHA Companies continues to grow, the company has expanded into six states, now serving in PA, NY, OH, WV, MD, and VA. In recent years, Joe’s role has shifted from working “IN the business to ON the business.” Joe believes that owning and growing a business has taught him how to be a lifelong learner, because you can never know enough, and there is always room for improvement and growth. This mindset has allowed Joe to change and adapt to new roles, skills, how he lives out his values, and the way he spends his time. He is excited about how the people in the company continue to grow and expand in new directions every day.

Joe is supported and cheered on by his wife Lori and three sons, Evan, Seth, and Eli, along with the family dog, Sugar. Joe met Lori by pure coincidence; Joe and his roommate Todd got locked out of their apartment one day and needed to get the spare key from Todd’s fiancé. When they got there, Joe saw Lori for the first time and asked who she was. It was only a short while after that the two officially met and starting dating. When Joe has free time, he enjoys reading, spending time with his family, hunting, skiing, and camping.